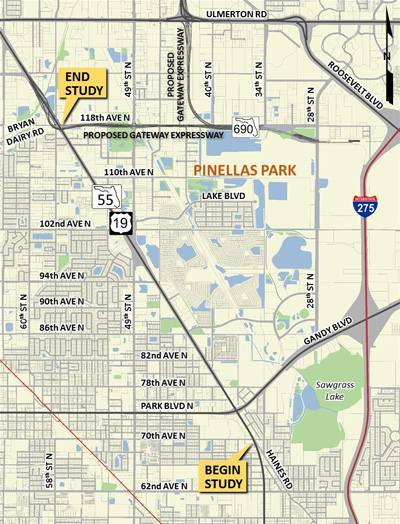 The Florida Department of Transportation (FDOT), District Seven has completed a Project Development and Environment (PD&E) Re-evaluation Study along a portion of US 19 in Pinellas County. This PD&E Re-evaluation Study evaluated the need for improvements along US 19 (SR 55) from 66th Avenue North to SR 690 / 118th Avenue North in Pinellas Park, Florida, a distance of approximately 3.8 miles.

The proposed improvements consist of widening the existing 6-lane roadway to include one auxiliary lane in one or both directions. The three through lanes and the auxiliary lanes will each be 11 feet wide. This section also includes 7-foot buffered bicycle lanes and 6-foot sidewalks. The Gandy Boulevard/Park Boulevard interchange will be reconstructed to include dual left-turn lanes on each approach and dual right-turn lanes on the westbound approach. The existing 4-lane Gandy/Park Boulevard bridge will be demolished and replaced with a new 6-lane bridge. One additional auxiliary lane will be constructed in the westbound direction along Park Boulevard between 40th Street North and 43rd Street North. The intersection of Gateway Centre Boulevard will be converted to a signalized intersection with additional turn lanes on the approaches to the intersection. US 19 will require approximately 5.3 acres of additional right of way to construct these roadway improvements and associated stormwater management facilities. Approximately 16 business relocations and five residential relocations will also be required.

Funding constraints require the improvements detailed earlier to be implemented in phases. A smaller scale project is being implemented to construct the following short term improvements:

This project is needed to better accommodate projected future roadway volumes, including the large number of commuters traveling within the corridor.  Additionally, US 19/SR 55 serves the western edge of the Gateway Business District, which is a large employment and activity center within Pinellas County.  The needs for the project are based on the following criteria:

The University of Florida’s Bureau of Economic and Business Research (BEBR) projects that Pinellas County, with a current estimated 2016 population of 954,569, is projected to grow to 982,175 by 2040 with medium population growth, which is an increase of approximately 2.9%.  As the population increases, roadway volumes are projected to increase as well.

The Pinellas County Metropolitan Planning Organization’s Transportation Improvement Program (Fiscal Year 2016/2017-2020/2021) lists the portion of the project corridor from SR 694/Gandy Boulevard to 49th Street North as a resurfacing project (431496-1) with construction completed in FY 2016/17. The project corridor from 70th Avenue North to SR 690/118th Avenue North is listed as an interchange improvements project in FY 2017/2018.

This PD&E study is included in Florida Department of Transportation’s (FDOT’s) Adopted Five Year Work Program for Fiscal Years (FY) 2017-2021 for District 7 (Item No. 435914-1); the Project Development and Environment (PD&E) study is currently funded for $1,011,000.  The 2040 Pinellas County LRTP indicates that the project corridor south of 49th Street North, and portions of the corridor north of 49th Street North, are forecasted to be areas of significant congestion.

This is consistent with the Pinellas County Comprehensive Plan.

St. Petersburg/Clearwater International Airport is an intermodal facility located just north of the project corridor.  Some traffic to and from the airport utilizes this portion of US 19/SR 55.

The Pinellas Suncoast Transit Authority (PSTA) is the transit service provider for Pinellas County.  The Pinellas Park Transit Center is located on 66th Avenue North just west of US 19 on the south side of the Shoppes at Park Place mall.

There are no upcoming meetings.

The Florida Department of Transportation (FDOT) completed a Project Development & Environment (PD&E) Re-evaluation Study for proposed improvements to US 19 (SR 55) from 66th Avenue North to SR 690 / 118th Avenue North in Pinellas County. This project is a re-evaluation of a PD&E study originally completed in 1990. Re-evaluations verify that the study results are in compliance with applicable Federal and State laws before moving into a production phase for the area. This re-evaluation serves as a check on the commitments made by FDOT during the original study process. The re-evaluation documents compliance with Federal laws and any changes that may have occurred since the approval of the original final recommendations.

The US 19 PD&E Re-evaluation Study began in February 2016. The project activities included collecting information, developing roadway improvement alternatives and evaluating the potential environmental and social effects of the “no-build” and “build” alternatives.

On October 30, 2019, FDOT’s Office of Environmental Management (OEM) approved the US 19 PD&E Re-evaluation.

For issues related to the final design of this project, please contact:

For all other inquiries related to this project, please contact: