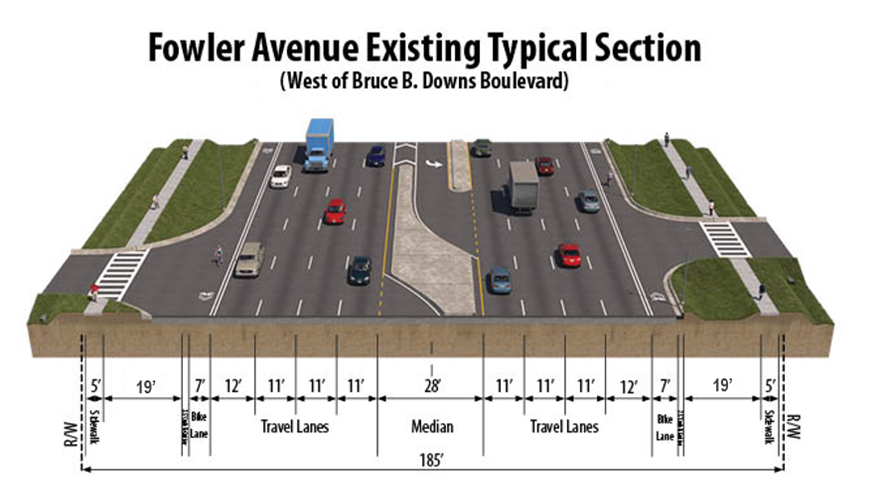 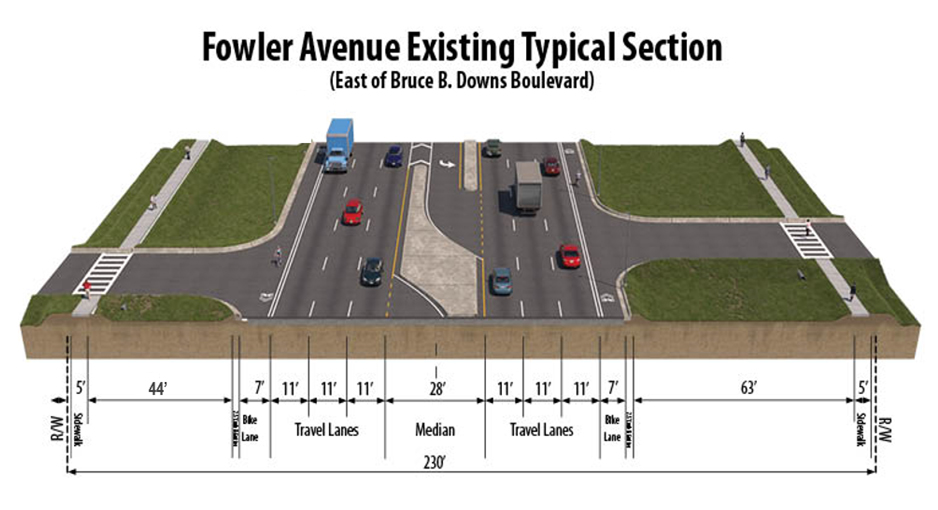 The objective of the project is to develop and evaluate a “Build” alternative and provide the environmental and engineering analyses and documentation for the FDOT to reach a decision on the type, conceptual design, and location of the improvements. The “No-Build” or “No Action” alternative remains a viable option throughout the PD&E Study.

The PD&E Study will be finalized when the project documents are approved by the appropriate FDOT office(s). If a “Build” alternative is selected and funding is programmed, the project may then proceed to the next phases of project development, which includes the final design, right of way acquisition, and construction phases.

Fowler Avenue is an urban principal arterial that provides vital east-west connectivity between I-275 on the west end of the project corridor and I-75 just outside the project corridor to the east.  The 7.8-mile alignment of Fowler Avenue is from N. Florida Avenue to U.S. 301, a major U.S. route that runs from Sarasota, FL to Delaware.  The corridor is a regional east-west commuter route for residential communities that lie to the west (Forest Hills and Carrollwood) and east (Thonotosassa).

There are also existing bicycle lanes and sidewalks on both sides of Fowler Avenue providing connectivity for individuals and bicyclists.

A total of 3,320 crashes were documented between 2015 and 2019 along this corridor. Approximately 56% were rear-end crashes, which is a crash type typically related to “stop-and-go driving” conditions and is indictive of traffic congestion, and approximately 20% were angle and left-turn crashes. Of the 3,320 total crashes, there were 53 severe crashes with nine fatalities and 46 incapacitating injuries.  A total of 120 of the total crashes involved a pedestrian or bicyclist, which includes the nine fatalities and 17 incapacitating injuries.  Refer to the graphics below for all crashes and crashes with pedestrians and bicyclists.

From Nebraska Avenue to Bruce B. Downs Boulevard/N. 30th Street, three transit corridor alternatives will be analyzed independently during the PD&E Study.  All three alternatives include the conversion of the existing general purpose/continuous right turn lanes into transit prioritized/exclusive lanes to accommodate transit.  These transit alternatives include:

Refer to the following graphics developed for FDOT’s University Area Multimodal Feasibility Study for each transit alternative.  These alternatives will be further developed in accordance with this study as it progresses. 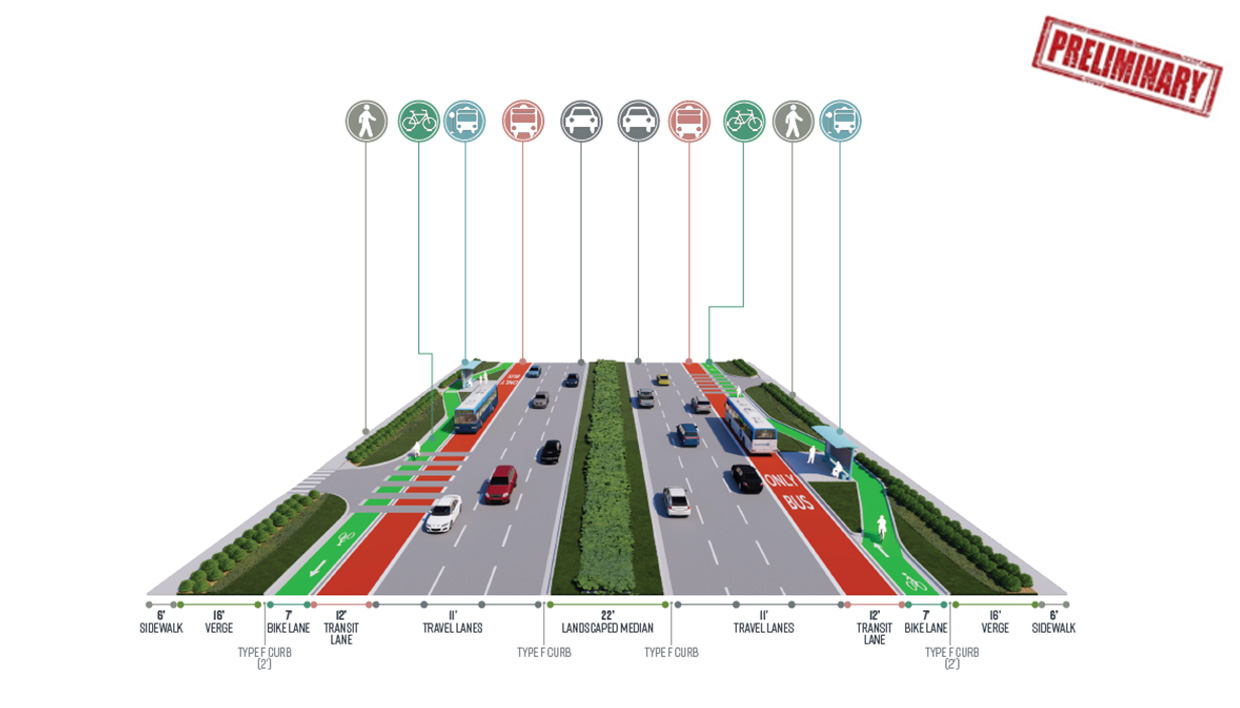 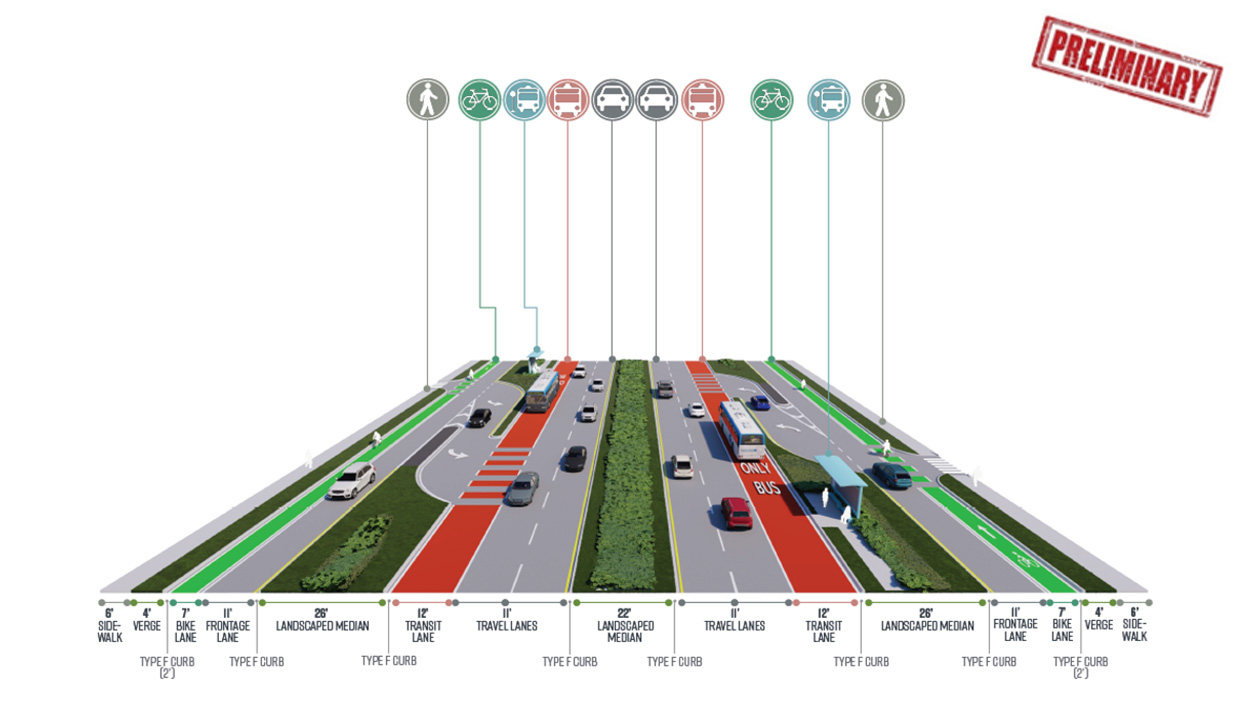 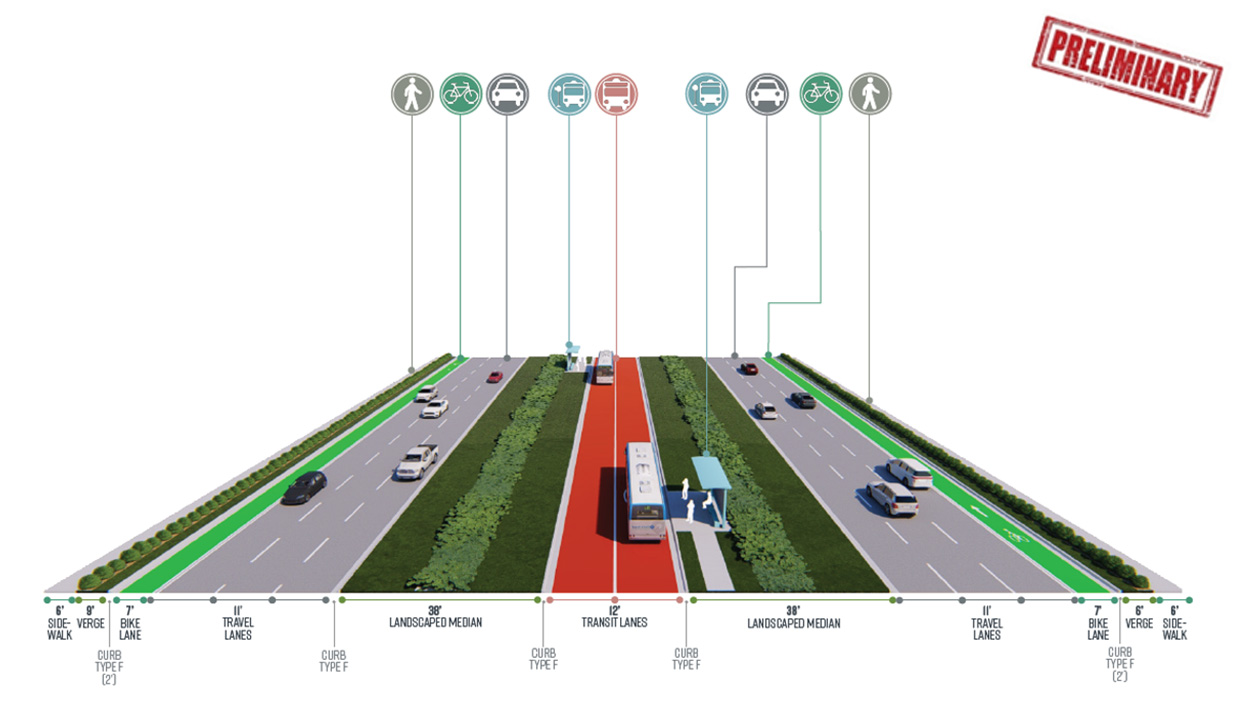 Purpose of the study:

Pedestrian and Bicycle Crashes include:

Demographic data found in the FDOT Environmental Screening Tool identifies areas west of Bruce B. Downs Boulevard both north and south of Fowler Avenue that have large populations with no or only one vehicle per household making these populations dependent on walking, bicycling and transit.  Additionally, the University of South Florida (USF), located on the corridor just east of Bruce B. Downs Boulevard, is attended by over 24,000 students, many of whom commute along the corridor to the campus and many of whom live in student apartment housing surrounding the campus that walk, bicycle or rely on the USF student transit service, the Bull Runner.  Providing a safe, travel time reliant, transit, pedestrian and bicycle friendly facility is imperative to obtain Vision Zero objectives for the corridor.

The Florida Department of Transportation (FDOT) District 7 is conducting a View the “What is a PD&E Study?” page PD&E Study for Fowler Ave (State Road 582).

Send Us Your Comments

Your comments are very important. You may send us your comments via the Comments page on this website so that they can be considered as part of this study.

The Fowler Avenue PD&E Study began in June 2022. Public information/small group meetings will be held throughout the study with an Alternatives Public Workshop scheduled for the 2nd quarter of 2023. The study is expected to be completed by the 1st quarter 2024.

Public participation is solicited without regard to race, color, national origin, age, sex, religion, disability or family status. Persons who require special accommodations under the Americans with Disabilities Act or persons who require translation services (free of charge) should contact Roger Roscoe, Public Involvement Coordinator, at (813) 975-6411 or by email to: roger.roscoe@dot.state.fl.us