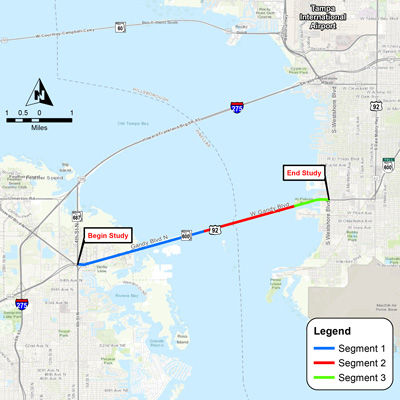 The following sections provide additional information on the purpose of and need for the project in addition to a description of the proposed improvements.

The purpose of this project is to reduce traffic congestion and improve bicycle and pedestrian accommodations on Gandy Boulevard within the project limits.

In addition to addressing roadway capacity, this project will also address the need for pedestrian and bicycle accommodations. Currently, no on-street bicycle accommodations and a multi-use trail/shared use path segment are present on Gandy Boulevard within the study area. According to the Hillsborough Metropolitan Planning Organization’s (MPO) Tampa – Hillsborough Greenways and Trails Plan and Forward Pinellas’ (Pinellas MPO) Bicycle Pedestrian Master Plan, there is a need for bike lanes and a multi-use trail/shared use path within the study area. The Duke Energy Trail and Gandy Bridge Trail are unfunded gaps in the SUN Trail Network connecting the Pinellas Loop Trail to the west and the South Gandy Park Trail to the east.

The study will evaluate capacity improvements (adding travel lanes) and the addition of bicycle and pedestrian improvements, e.g. multi-use trail, along the study corridor. Bridge widening and/or replacement is anticipated for this project and a grade separated overpass at Brighton Bay Boulevard will also be evaluated.

The Florida Department of Transportation (FDOT) District 7 is conducting a Project Development and Environment (PD&E) study for US 92/SR 600/Gandy Boulevard, hereinafter referred to as Gandy Boulevard.

Send Us Your Comments

Your comments are very important. You may send us your comments via the View the "Send Us Your Comments" pageComments page on this website so that they can be considered as part of this study.

Visit the View the "Send Us Your Comments" pageComments page and join our mailing list to receive project updates.